Mack’s MD Series is a rebirth of sorts for a company whose mantra is “Born Ready.”

Mack exited the medium-duty segment almost 20 years ago with the retirement of the Freedom, which was mostly a rebadged Americanized Renault. The Freedom concluded Mack’s 20-plus-year run with its medium-duty Mid-Liner.

The MD entered production just 13 months ago at the company’s new 280,000-square-foot Roanoke Valley Operations (RVO) facility in Roanoke Valley, Virginia. Mack announced its re-entry into the medium-duty market in January 2020, but COVID protocols delayed production from July to September 2020.

Targeting medium-duty trucking vocations with frequent urban stop-and-go cycles like dry van/refrigerated, stake/flatbed, dump and tank, the 25,995-pound gross vehicle weight rating MD6 and 33,000-pound GVWR MD7 are both exempt from the 12% federal excise tax, and the MD6 model slides in just under the cutoff for requiring a commercial driver’s license for non-hazardous payloads.

Nextran Truck Centers Sales Manager Bruce Graham said the bulk of the units moving through his Birmingham, Alabama, dealership have been spec’d with flatbeds, but service bodies have become increasingly more common, with some vans mixed in.

Bruce and his team at Nextran loaned me an MD6 to shuttle around the greater Birmingham-area – a Glacier White Class 6 outfitted with a Lyncoach box. This is a fairly standard configuration for a local-route beverage hauler, which is exactly where this unit was headed.

Mack didn’t have to look far for inspiration for its MD Series. There’s no denying the influence of Mack’s on-highway flagship Anthem. The squared-off nose; the grille; the body lines; a wrap-around dash with ergonomic controls; a tilt telescopic steering column with flat-bottomed steering wheel; power windows and door locks; cruise control and a driver air-ride seat are all regular long-haul driver comforts found in the MD Model. Anthem’s paw prints are all over the MD inside and out.

The MD6 and MD7 models feature a sharp wheel cut for enhanced maneuverability, and their air-suspended steel cab features an industry-best bumper-to-back-of-cab measurement of 103 inches. Eight wheelbase lengths will support typical bodies from 10 to 26 feet. My test drive model was a 270-inch wheelbase.

The wheels are a standard 22.5 inches, but 19.5-inch wheels are available. Other standard features include the basics like power windows and locks, cruise control and air conditioning. An optional two-passenger bench seat allows fleets to deploy crews of three, and a flip-up bottom grants access to a large bin for storage.

The view from the standard air-ride driver’s seat is commanding, and the air-suspension cab is comfortable. Base models get a spring rear suspension, but Mack’s Maxlite air suspension is available. My test unit had air.

It would be easy to assign a lot of the truck’s pleasant on-road manners to the air system, but that would overlook the durable yet lightweight chassis (7mm thickness for the MD6 and 8mm thickness for the MD7), constructed to an industry standard 34-inch frame width using 120,000 psi steel rails – a considerable bump from an industry standard 80,000 psi.

The MD is Mack’s first all-new truck model since the 2017 debut of Anthem. It’s also one of very few bulldogs to offer a non-Mack powertrain. Both MD models are equipped with an inline 6-cylinder Cummins B6.7 engine, making up to 300 horsepower and 660 pound-feet of torque.

The B6.7 is the most popular diesel engine Cummins builds, and its B Series has been on the market for nearly 40 years in various iterations. It’s pretty much the ubiquitous medium-duty engine. Cummins’ Single Module aftertreatment bundles the diesel particulate filter, selective catalytic reduction and diesel exhaust fluid doser into one unit.

In the MD, the B6.7 is matched with an Allison 2500HS transmission and Meritor axles. An Allison 2500RDS is available for applications needing a PTO.

My drive around Birmingham covered a little less than 100 miles, not an uncommon daily trip shunting around Coca-Cola products, and the truck felt just as at home at 70 mph pulling a grade as it was at 15 mph navigating a loading zone, or low-speed in a crowded Buc-ee’s parking lot. Yeah, I know. Buc-ee’s isn’t truck-friendly, but sometimes, when you want a Coke Icee, you have to take matters into your own hands.

Now that a formal infrastructure plan has finally passed, Mack couldn’t have picked a better time to get back into medium duty – especially with a model as versatile as MD.

In all, the MD Series is a comfortable and capable traffic fighter with plenty of workhorse capabilities and flexibility that both fleets and drivers will love, especially if you need to make a black-ops Icee run.

Did you miss our previous article…
https://www.jamesconstruction.net/?p=1036 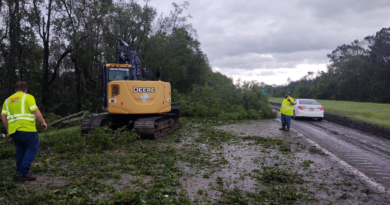